PUBGMobile’s season 6 is about to end, but if you are anxious to know what Season 7 of the hit mobile game has in store, you are in luck. Details of PUBG Mobile’s Season 7 have been leaked, alongside some information about the Season 7 Royale Pass and the rewards that come with it. As per the fresh leak, there will be a new handheld weapon in Season 7, a ton of new skins for guns as well as helmets, new outfits, and avatar customisation options to name a few. Season 7 of PUBG Mobile is expected to kick off via an update, which is scheduled to roll out next week. 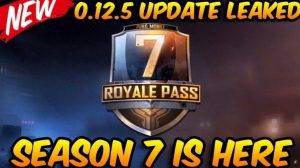 The PUBG Mobile Season 7 leaks come  courtesy of YouTuber Mr.GhostGaming, who has leaked details about the upcoming game elements as well as the time of new season’s arrival. If the leak is anything to go by, Season 7 will kick off with the rollout of an update with the build number 0.12.5, which is tipped to arrive on May 17. Prior to that, PUBG Mobile’s servers will be temporarily taken down on May 16, while the Season 7 Royale Pass registrations will begin on May 18.

Talking about the new in-game elements in PUBG Mobile set to arrive with Season 7, there will be new avatar frames, a new gun called ‘Skorpion’, a new moustache style, flight trail and parachute trail rewards. Players will also get new skins for guns like AKM, Kar 98K, M4, and UZI, as well as level 1 and level 3 helmet skins, alongside level 1 backpack skin.

As for the Season 7 Royale Pass, the Elite Upgrade will cost 600 UC (Unknown Cash, PUBG Mobile’s in-game currency), while the Elite Upgrade Plus tier can be opted for by shelling out 1,800 UC. Players will get 100 PR points for purchasing the royale pass, and will also be eligible for two exclusive costumes called Urban Scavenger or Assault Squad once they cross the level 100 in the Royale Pass. Season 7 is also tipped to introduce a new mission system called Royale Pass EZ Mission License.

As a perk, Royale Pass members will get access to weekly challenges one week ahead of other players, free mission cards every week, and the option to skip 10 mission requirements in week 8 to directly open the elite chest. A new ranking system will also be introduced in PUBG Mobile Season 7, but not many details are available regarding the same.