Amazon quiz is now on a daily basis but only for 4 hours from 8 AM to 12 PM and a great chance to win huge prizes from Amazon. In today’s Amazon app quiz, Answer 5 simple questions and stand a chance to win a Fitbit Ionic Smartwatch. 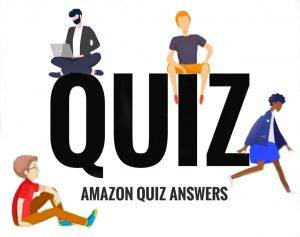 Q1) Molten rock that erupts out of a volcano is called Lava. What is it called when it lies under the Earth’s crust?
Ans – Magma

Q2) Conventional, orographic and frontal are all types of ____. Fill in the blanks.
Ans – Rainfall

Q3) India’s top-ranked badminton player and Olympic silver-medalist PV Sindhu became the first woman to co-pilot this aircraft at the Aero India 2019 air show. Which aircraft was it?
Ans – Tejas

Q5) Mukesh and Nita Ambani’s son Akash Ambani recently tied the knot. Who did he get married to?
Ans – Shloka Mehta